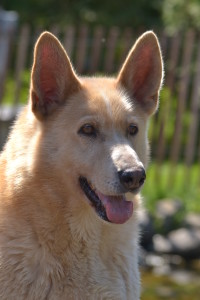 Last week’s blog addressed some important issues about pet safety and toys. This week we will continue along the topic of toy safety by sharing Dingo’s story. Dingo, like all of our other Alaskan Sled Dogs, is an avid chewer and will attempt to swallow anything that fits in his mouth. Constant vigilance is our reality but sometimes even our very best just isn’t good enough. One opportunity to grab a toy without anyone noticing became more than just fun and games. For Dingo, it became a very real danger.

Dingo, our now 7 year old Alaskan Sled Dog, required surgery to remove a foreign object from his gastro-intestinal tract in 2012. We are not sure how it happened but Dingo had, at some point, managed to get hold of a toy and chewed off and swallowed a large portion of it. We were totally unaware that he had swallowed the object as he did not show any signs of digestive difficulties. He was consistently eating all of his meals, there was no vomiting, and his bowel movements were normal.

Dingo’s troubles really started the day we noticed that he was bringing up bile. We weren’t immediately sure what the cause was and hoped that his body would sort everything out and that he would be back to normal the following day. This, however, was not the case. Dingo would eat and drink when given food or water but was not able to keep it down and, after a short time, would bring up what he consumed. We had also been monitoring him for any bowel movements which could give us some clues as to what we were dealing with. Once it was clear that nothing was moving through his GI tract, we knew it was serious. When we took him to the vet, an x-ray concluded that a foreign object had been ingested and must be removed surgically. The object had become lodged in his small intestine and had been large enough to block blood flow to the tissue surrounding it. Luckily, when the piece of toy was removed, the intestines started to pink up and regain circulation. This meant that he would not require a surgical resectioning of the intestine, which could have been the case if left untreated much longer.

We are glad that Dingo’s surgery went well, but even his recovery wasn’t without problems. For a while Dingo refused to eat which was likely because it irritated his stomach. He also refused to take his pills which required us to intervene with a little tough love, for which I’m sure he is now thankful. After Dingo was rehabilitated, he was reintroduced to his pack and was successfully able to re-establish himself as pack leader without incident. He has since made a full recovery and, to date, has not shown any signs of lasting complications. Ultimately, Dingo got hold of a toy that was not suitable for his style of play or intense chewing. The result was devastating but Dingo’s story has a happy ending. The sad truth is, too many dogs in similar situations are not so fortunate. 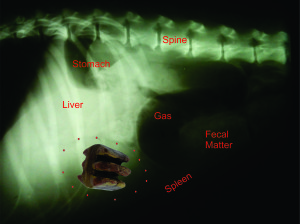 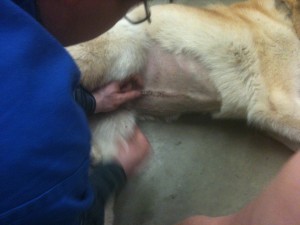