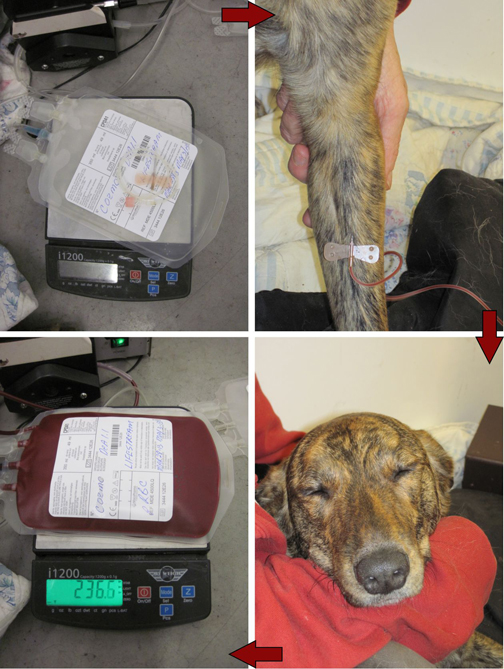 Cozmo (since adopted) rests his eyes during his blood draw

Blood! A complex and efficient biologic fluid, it is the essence of life for creatures big and small. It is made up of several different components, each of which are important in the functionality of our physical bodies. Distributing nutrients, carrying oxygen, eliminating toxins, and fighting infections are just a few of the vital roles that blood performs.

In the veterinary industry, much like with humans, blood is an essential and lifesaving substance. The transfusion of whole blood, or any of its components, is often used to treat certain diseases and injuries, or to facilitate surgeries. Blood cells may also be used as a beneficial, post-operative treatment for dogs that have undergone surgeries, as was the case with some of our rescues.

Before a dog may become a donor, pre-screening blood tests are performed in order to rule out the risk of spreading infection and disease. The tests only require a small amount of blood to be drawn and, typically, include complimentary testing and blood typing. Dogs, like people, have different blood types. Much like our “O negative”, the canine world also has what is considered a universal donor (blood type DEA 1.1). Certain breeds, including Dobermans, German Shepherds, Boxers, Greyhounds, and Great Danes, are more likely to be universal donors.

Donating blood is not generally a stressful ordeal for the dog, but there are a few requirements that should be met. In order to be successful, each prospective donor should be:

We are fortunate to be able to work with the kind and caring people of LifeStream Animal Blood Bank. Their team of technicians have adopted a method that is truly compassionate and non-invasive.

Throughout the years, several of our rescues have had the opportunity to donate blood. We are proud to say that some of them, including Zeppelin, Dodger, Ozzy, Cheyenne and Juno, have even donated blood that saved another dog’s life!